Mending a Heart on Valentines Day

On Valentine’s Day, three years ago, Helen Diplock was mentally preparing for her three-month-old baby to undergo heart surgery.

Rosie was born in Brighton’s Royal Alexandra Children’s Hospital with a hole in her heart, a condition called atrioventricular septal defect (AVSD). A complete AVSD means there is a hole across the middle of the heart. Instead of two healthy valves, there’s just one flat valve which leaks.

Helen was twelve weeks along in her pregnancy, when a scan revealed a high risk that Rosie would be born with Down’s syndrome. It was the first tough experience in what would become a saga of hospital rooms, medical lingo and meetings with specialists. 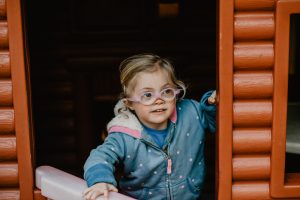 “The risk was 1 in 120, but we refused further testing because we knew it wouldn’t change the outcome,” Helen said.

“For us, Down’s Syndrome was not a reason to terminate.” So Helen and her husband Pete put the risk to the back of their minds, with no way of knowing this was only the beginning. The couple accepted the midwife’s offer of an extra scan at 20 weeks but otherwise carried on as normal.

It wasn’t until two months later, lying in a room at Brighton Hospital while waiting for the results of this second ultrasound, that Helen realised something was seriously wrong. “The consultant was really professional – almost too professional,” Helen said 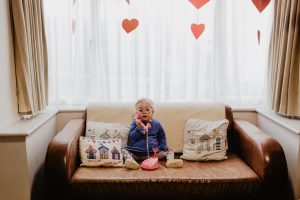 “When everything is okay they usually get a bit excited, like ‘oh, it looks great’, that kind of thing. When you don’t get that, at some point you kind of think, ‘okay, something’s up’.”

The couple were moved into another room, where a specialist midwife was waiting for them. She explained what the scan had shown and what the next step would be.

Upon hearing the diagnosis, Helen was terrified. “A lot of it was fear of the unknown,” she said.

“I didn’t know what it meant, and I had no way of knowing whether we were talking about something minor that would solve itself, or whether it was a major problem. The thing that Pete and I were really scared of, was her having the operation, something going wrong, and her ending up severely damaged.” 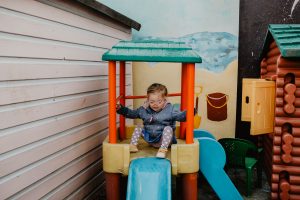 When Rosie was born, it was clear she was a fighter. She was a healthy weight and initially was really heart-healthy. But the next few months were tough, with a bout of bronchitis followed by the flu, and later pneumonia.

For the first three months of Rosie’s life, Helen spent more time at the Ronald McDonald House in Brighton, than she did at her own home.

The House represented an escape from the beeping machines and fluorescent glare of the hospital ward, Helen said, and was somewhere she and her husband Pete could spend time with their eldest daughter.

At eleven weeks, as doctors anticipated, Rosie went into heart failure. Her health was deteriorating rapidly, and Helen remembers the fear of not knowing whether she would pull through.

At 12 weeks Rosie was whisked away from Brighton and back into London, where her mum, dad, and older sister Sophie based themselves at the Ronald McDonald House opposite the Evelina London Children’s Hospital. She was scheduled for her surgery on February 15 – which also happened to be Helen’s birthday.

“I remember at the time I thought, you know this is the worst day for all of this to happen,” Helen said. But to everyone’s relief, the operation was a success. Despite picking up a cold, then the flu  in PICU, Rosie proved she was a fighter, bouncing back to recover fully from her scare.

Three years on, Rosie is a happy, healthy toddler who in Helen’s opinion, is “scarily fearless”. “She’s like an energy field, when she’s awake she absolutely doesn’t stop,” Helen said.

Rosie started preschool this year, she played little kickers once a week, enjoyed ballet and was learning how to communicate – partially through signs. Helen isn’t big on the over-priced boxes of chocolates and heart-shaped balloons that go hand-in-hand with a modern Valentine’s Day.

But each year, on the day after Valentine’s Day, the family had two things to celebrate; her birthday, as well as Rosie’s ‘Heart Day’. The family took some time out together, Helen said, and there was always cake.

“Really, Rosie heart being mended, and being mended so amazingly well, that’s just the best gift i could have received.”

Atrioventricular Septal Defect: What you need to know

What is complete and partial atrioventricular septal defect?

There are two types of atrioventricular septal defect (AVSD) – complete and partial.

A partial AVSD is very similar but there is no hole between the ventricles.

What are the symptoms of AVSD?

What other conditions are associated with AVSD?

Chromosomal abnormalities, like Down’s Syndrome, which are often associated with learning difficulties.

Can AVSD be treated, or cured?

Babies with a complete AVSD will usually need major surgery to repair the defect when they are about three to six months old.

In babies with partial AVSD the operation is usually not necessary until they are a few years old.

You can find out more about complete and partial atrioventricular septal defect here: https://www.bhf.org.uk/informationsupport/publications/children-and-young-people/understanding-your-childs-heart—complete-and-partial-atrioventricular-septal-defect