After twins Finley and Billy were born premature, parents Laura and Robert found their lives in turmoil. Mum Laura shares their incredible journey.

On 12 October 2016, our identical twin boys were born 12 weeks prematurely. Finley was born first, weighing 3lbs 2oz and Billy arrived two minutes later, weighing 1lb 10oz. They were immediately taken away to the Neonatal Intensive Care Unit and were made stable.

The following day, Billy suddenly became very unwell and a scan showed that his tiny bowel had perforated. He was rushed to theatre for emergency surgery and a stoma was formed which saved his life. It was an extremely stressful and upsetting time. Our tiny boys were here far too early, were extremely ill and it would be days before we could hold them.

Once I had been discharged, we were provided with accommodation a few minutes’ walk from the hospital. As hard as it was to leave our babies every night, it was reassuring to know that we were only moments away. 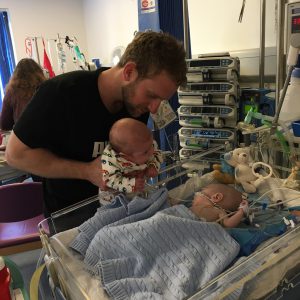 Unfortunately, there are only a few rooms available for the whole of the Neonatal Unit and after a week, we were told that the parents of a critically ill baby needed our room. I was completely distraught at the thought of leaving my tiny babies, while we had to go home, an hour’s drive away.

The first night we had to leave Finley and Billy at the hospital to come home was heart-breaking. It is very hard for me to put into words the grief and pain I felt at leaving my two tiny and very poorly boys. I sobbed the whole way home and all night whilst making numerous phone calls to the hospital to check on the boys. To be separated from your children so soon after giving birth and while they are so ill is unnatural. My mental and physical health definitely suffered as a result of our separation. If only there was somewhere for all parents to be able to stay with their babies.

After 11 weeks in the Neonatal Unit, we were finally able to bring our boys home. Billy was still on oxygen and still had his stoma, which would need reversing, but both boys were doing well.

However, after seven short weeks at home, Billy was admitted to Oxford Children’s Hospital for planned surgery to reverse his stoma. We were told that he would need to stay for approximately 10 nights, so we were thrilled to be offered a room in Ronald McDonald House so that we could be with Billy for the duration of his stay.

Just two days after Billy’s surgery, he became critically ill and was rushed back to theatre. As we said goodbye to Billy, we had no idea if Billy would survive the surgery. We were so very grateful to be able to go back to our room in Ronald McDonald House and be able to wait and cry and hope and pray in private.

We finally got the call to say that Billy was out of theatre and we ran as fast as we could to see him. Billy was very ill following this emergency surgery and we were heartbroken to be told that he now faced a long hospital stay of at least three months. How would we cope? Billy needed us but so did his twin brother. How would we be able to bond with both babies? And how would they be able to bond with each other? 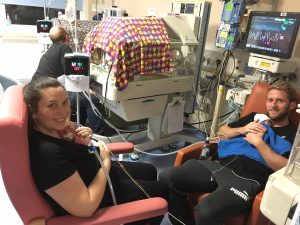 To be told that we could continue to stay in Ronald McDonald House and have Finley staying with us was a huge relief. We were able to stay together as a family for the duration of Billy’s stay (which was almost five months in the end!).

The House became so much more than just a place to stay. It really became our home from home and even though we had some extremely frightening and turbulent times, we also managed to create some lovely memories from our time in the House. Finley tried his first puree in the house and the facilities available to us meant that we were able to start weaning Finley easily and was one less thing we had to worry about.

We celebrated our first Easter, Mother’s Day and Father’s Day during this time and the staff on each of these occasions made it really special for us. They even arranged a visit from Benefit to give me a makeover and some pampering!

The first time that Billy was allowed an hour off medication and was allowed to leave the ward, we took him straight to the House and spent a blissful hour in our room being a ‘normal’ family. Our room became our sanctuary during this time. It was somewhere we could escape to if it all got too much on the ward and was somewhere that we could spend precious family time together.

Without the Ronald McDonald House, life would have been a lot more stressful and exhausting. Every parent should be able to stay with their sick child and we are so thrilled that the Charity continues to build new Houses across the UK. I know what it’s like to have to walk out of hospital, leaving your very sick child behind and I hope that no one will have to experience that in the future.

After 136 days in hospital, Billy was finally discharged home. In total, he had spent almost eight months in hospital since birth. I am pleased to tell you, that both Billy and Finley are now doing very well and are both very energetic, funny, happy and healthy little boys. Thankfully, they won’t remember their time in hospital, but we will make sure that they know all about Ronald McDonald House Charities which kept our family together.

We are so grateful for Ronald McDonald House Charities and for the incredible staff who go above and beyond the call of duty. Thank you for everything you do.